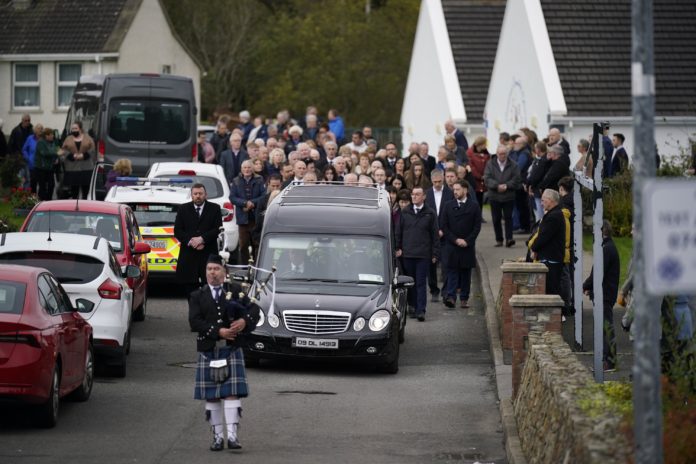 THE Irish community of Scotland rallied around the people of Creeslough and Donegal, with an outpouring of love and support following the tragic explosion in the town which claimed the lives of ten people and injured multiple others.

The incident caused shock throughout Donegal and across Ireland, with the local community rallying around the victims with emotional and practical support coming from people around the world.

The close links between Scotland and Donegal left the Irish community here reeling from the news, with particular sadness caused by the death of Martin McGill of Kirkintilloch, who had moved to Creeslough to care for his elderly parents.

Columnist comments
Johnny Foley of The Irish Voice shared his reaction to the explosion, telling of the growing sense in the area that something serious had happened.

“From my own memories of the day, I remember hearing a few sirens shortly after three o’clock. I was out for a walk at the time. It’s not unusual to hear emergency vehicles in Letterkenny but, because this sounded like three or maybe four ambulances, you just knew something serious had happened,” he said. “When the news came through of the explosion, I think it was the ‘not knowing’ that caused so much concern and distress. Everybody knew that people had lost their lives and the number kept going up over those fateful 24 hours. Knowing that some of them were children made it all the more harrowing.

“Huge credit has to go to the Creeslough community though. They were always a close-knit community but they pulled together almost immediately after the tragedy. I’m sure that, in time, we’ll get around to properly thanking them, the emergency services as well as the religious and charity orders who’ve all done so much already.”

Harps reaction
As the initial shock of the explosion turned to immense sadness, the Donegal diaspora moved quickly to offer practical support, and Tír Conaill Harps GAC put in place fundraising efforts to offer whatever financial help they could.

“As a club Tír Conaill Harps is intrinsically linked with Donegal,” Chris Coll of Tír Conaill Harps, said. “Many of our players and club members are either from the area or have strong links to the place, so to hear of such a tragedy happening in the beautiful rural town of Creeslough is heartbreaking.

“Everyone at the club was shocked and saddened at the events that unfolded that day. Our thoughts and prayers go out to the ten victims, their families and the wider community. You feel so helpless at times like these and even more so being so far away from it all.

“Tír Conaill Harps themselves will be holding a raffle to raise funds for the victims and their families. It’s a small gesture, but more than the money raised we just want the people of Creeslough and Donegal to know that they are in the hearts and prayers of everyone at Tír Conaill Harps.”

Celtic connection
Those close links between Donegal and Scotland were further recognised by Celtic Football Club, who held a minute’s silence and wore black armbands in their Champions League tie with RB Leipzig.

“Everyone at Celtic Football Club wishes to send our most sincere condolences to the families of the 10 people who tragically died in Creeslough, Donegal on Friday and we offer our full support to the entire community, which is suffering so much at this difficult time,” a statement by the club said. “Through the club’s charitable arm, Celtic FC Foundation, £10,000 will be donated to the Creeslough Community Support Fund in the aftermath of this heart-breaking event.

“Donegal has a long and emotional connection with Celtic Football Club. The area is home to a large contingent of Celtic supporters, one of whom being Martin McGill, who tragically lost his life in the incident. We send our heartfelt sympathies to the families of all of the victims and the people of Creeslough. Our thoughts, prayers and support are with you all at this difficult time.”

Lives lost
The death of Martin McGill highlighted the terrible human cost of the tragedy for the Irish community in Scotland and tributes were paid to a man who made himself part of Creeslough life as he cared for his elderly parents.

At his funeral Mass in St Michael’s Church in the town, parish priest, Fr John Joe Duffy, said that he was now reunited with his father, Joseph, who died recently.

“A person where you could see the goodness flowing out from him. It was effervescent. It was like when you tighten a bottle and you give it a shake as a child and make it go all over the place when you open it up. He was just so caring. The caring flowed out from him. Each Sunday he would be in this church, he would be down there lighting candles. I think he lit more candles than I ever lit anyway in my life. I don’t think anyone could break that record.”
While the heartbreaking news of ten lives lost in such a tragic incident has tinged the history of Donegal with sadness, the reaction of the Donegal people—and all the Irish—around the world has brought some comfort at a difficult time.

“The tragedy in Creeslough is painful and the hurt will last a lifetime,” JJ McGinley, regular contributor to The Irish Voice, said. “But the closeness of the local people and the support of the wider community has shown that in times of need the people of Donegal and the diaspora always come together.”

Members of Glasgow’s Irish community have also organised a month’s mind Mass to remember and pray for all the lives lost and affected by the tragedy in Creeslough.

“Scotland has a strong Irish—and in particular Donegal—diaspora who, like many across the world, were left devastated at the events,” the organisers said. “The Mass will be celebrated by Fr John J Carroll at Blessed John Duns Scotus in the Gorbals on Monday November 7 at 7pm.

“We encourage you to join us for tea and coffee in the adjoining hall afterwards.”