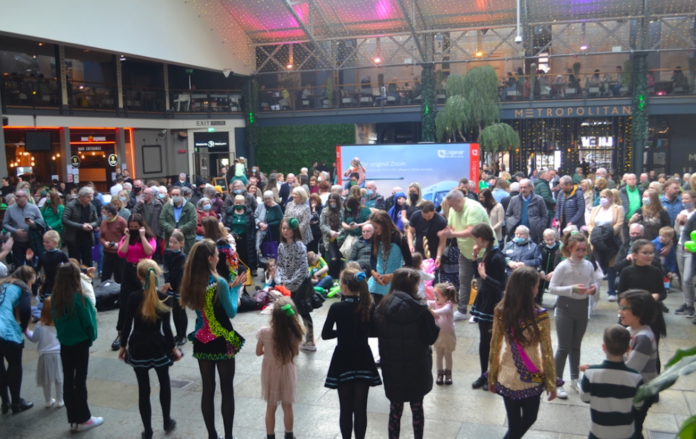 AFTER two long years without the opportunity to celebrate St Patrick’s Day, the global Irish diaspora is once again gathering to celebrate their Irishness on the feast of Ireland’s patron saint.

Cities and town all over the world are marking St Patrick’s Day, with Scotland’s Irish once again hosting festivals, events, concerts and celebrations following two years of cancellations due to restrictions.

Irish ministers are once again travelling all over the world as part of the Irish Government’s St Patrick’s Day programme, visiting countries with Irish diaspora communities as well as nations across the world with whom Ireland is developing a relationship.

The great return of celebrations in Scotland has already seen events take place in the lead up to St Patrick’s Day, with Coatbridge’s St Patrick’s Day Festival hosting several events and the festival in Glasgow returning once again with its Family Fun Day in the Merchant Square.

Coatbridge celebrations
Although the festival in Coatbridge has returned, their man event the Saturday Street Festival will not be hosted this year due to planning issues, but the very fact that celebrations are back at all marks a major step forward for the Irish in the town in emerging from the pandemic.

“We are pleased to announce that the St Patrick’s Day Festival Coatbridge 2022 will return with events this year, for the first time since 2020,” organisers said as they shared their plans. “Unfortunately our flagship event, the Saturday Street Festival which normally brings the overall festival to a conclusion, will not take place this year.

“The legacy and uncertainty of Covid-19, allied to the recent Omicron outbreak has prevented us from implementing sufficient planning and the acquisition of licences, that are essential in the staging for a street event of such a scale.
“However we shall continue with our regular event favourites such as The Irish Quiz, The Father Ted Evening and The Annual Lecture taking place this year.

“We’d sincerely like to thank everyone for their support over the last few collectively challenging years and look forward to your continued support as we move towards the future.”

Glasgow gatherings
Events in Glasgow also marked a major milestone for the Irish community there, with The Glasgow St Patrick’s Day Charity Ball returning after a two year absence to help raise vital funds for worthy charities and to remember a much-loved figure from their committee, Tony Docherty, who died in December 2021 and had been a stalwart of the event for many years.

The gathering in Merchant Square gave the chance for Irish bands, musicians and dancers to reconnect with their community with a major event, giving life to the Irish community in the city once again.

The festival there has also prompted calls for official civic celebrations of St Patrick’s Day, with Labour MSP Paul Sweeney bemoaning the lack of official support for community celebrations in Glasgow.

“Glasgow must be the only major western city with a large Irish diaspora—indeed one of the world’s oldest and largest—that doesn’t have official civic celebrations for St Patrick’s Day,” he said. “It’s time we addressed that.”

Though there were mixed reactions to his comments, it nevertheless highlights the lengths to which the Irish community in Glasgow go in order to celebrate their identity—with not even the pandemic being able to stop the unveiling of the Tower of Silence at St Mary’s, Calton, last year.

Such a focus on identity also comes at a crucial time for the Irish community in Scotland as they are encouraged to record their ethnicity in the census taking place this month and help build an accurate picture of the size of the community here.

Taoiseach’s travels
The St Patrick’s Day celebrations across Britain were also given a boost by the arrival of the Taoiseach in London, where he participated in their parade and spoke warmly about the opportunity for Ireland to reconnect with her diaspora after two long years of the pandemic.

Showing solidarity with the people of Ukraine, Taoiseach Michael Martin wore blue and yellow as he walked the streets of London and spoke strongly from the stage as he addressed the more than 50,000 people who attended, telling the people of Ukraine that the Irish government and people would do all they could to support them in their hour of need.

“The St Patrick’s Day programme for our government, as we reconnect with our communities all over the world, is really about that idea of reconnecting, of togetherness, of celebrating our identity, our culture, our arts and the tremendous diaspora and links we have built up all over the world,” he said. “I’m here to nurture that British-Irish relationship, which is the most important of all, given our family links down through the centuries.”

Having emerged form the strains and limitations of the pandemic, those organisations and individuals who do so much to celebrate Irishness in Scotland will now be looking forward to those other opportunities to celebrate community life here in the weeks and months which follow the latest easing of restrictions.