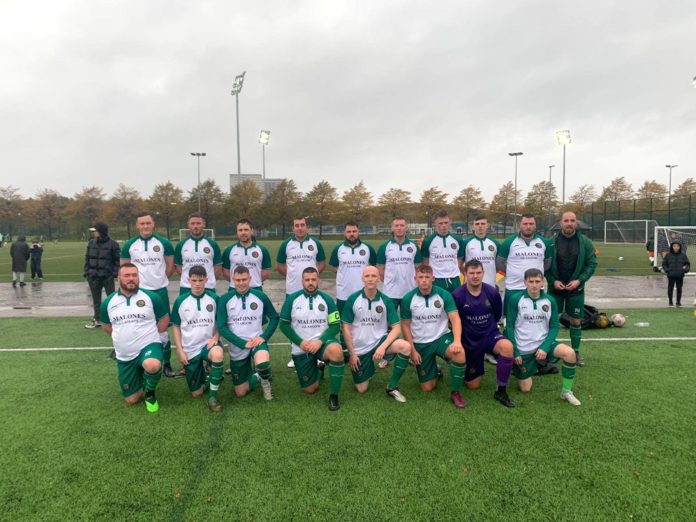 OCTOBER saw cup action for Edinburgh Harps as they built on their victory over namesakes Arbroath Harp in the Scottish Cup last month by putting their name in the hat for the next round of another competition.

A controlled performance against Callander FC in the East of Scotland Cup saw Harps run out as comfortable 5-0 winners, keeping their hopes of cup glory this year high.

That good run was not to continue in the next cup they contested though, as their Challenge Cup tie against familiar opponents Kirkliston and South Queensferry FC ended in penalty shootout heartbreak.

Battling on after going down to ten men at the start of the second half, Harps did enough to draw the match 2-2, but ultimately bowed out of the competition after the spot kicks.

They soon took their revenge, however, going up against the same club the following week and reversing the result. Though their run in that competition may be over, the 3-1 victory after falling behind was a satisfying outcome for a team still smarting from their Challenge Cup exit.

Also last month a 5-1 victory over Port Seton showed Harps are having no trouble in front of goal and meant that the penalty shootout loss was their only black mark.

Harps will be hoping to continue that run of food form as the league campaign continues and the cup rounds become ever more challenging.

On the West Coast, meanwhile, Glasgow Irish FC saw a mixed bag of results in October, with a win and two losses to show for their efforts.

A victory over Finnieston in tricky conditions secured another important three points. New signing Nicky McLaughlin opened his account early with a brace, but a back and forth period of action saw the scores level at 3-3 entering the final phase of the game. The Irish looked the stronger of the two sides and pushed for the late winner, which they eventually got through Tony Deveney.

Thornliebank were next up and despite goals from new boy McLaughlin and returning player Tony Garth the Irish didn’t have enough on the day.

The 3-2 defeat was less than perfect preparation for a cup tie against FC Pather—quadruple champions from last year. The Irish (above) knew they were up against it but fought well to keep the game in the balance for as long as they could. At 3-1 down they went all out to get the goal to reignite the tie but were punished by the quality of FC Pather—who ran out 5-1 winners—and what they Irish felt were some dubious decisions.

A West of Scotland Trophy game against EK Athletic rounded the month off for the Irish and despite opening the scoring through Jay Mathieson, that was as good as it got for the Glasgow side. An equaliser was conceded soon after and it stayed that way until the half-time whistle. Unfortunately, the second-half saw EK Athletic kick on and score another three goals without reply.

Despite the two most recent losses, however, the Irish have shown that they can compete with proven sides for large parts of the game, and will look to build on that and use it as a springboard for their upcoming fixtures.

On a lighter—or should that be darker—note, the Glasgow club held its Halloween Party in Malones Bar in the city, which a spokesperson described as ‘great fun for the lads and nice wee break from the football.’

“Thanks to Malones Glasgow for their continued support for the team and the amazing job that they do helping the lads out with food and drinks after the game as well as the financial support,” they added. “It is very much appreciated by everyone at the club.”