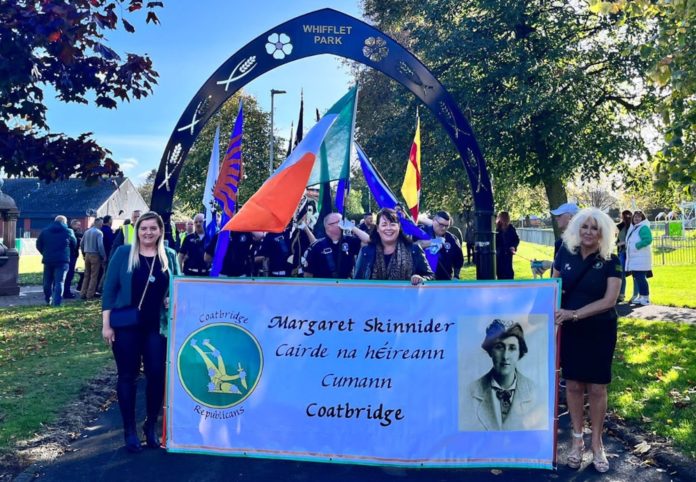 The first ever dinner dance organised by Cairde na hÉireann took place on October 22 in the Lanarkshire town with a host of events taking place across the weekend to celebrate the Irish revolutionary, who died in Dublin on October 10, 1971.

Margaret Skinnider was born in Coatbridge Scotland in 1892. She trained as a teacher in Glasgow and taught mathematics, before getting involved in the suffrage movement, Women’s Social and Political Union in Scotland and joining the Glasgow branch of Cumann na mBan.

Having joined the Irish Citizen Army (ICA) Skinnider returned to Dublin on Holy Thursday 1916 to take part in the rising under the command of Michael Mallin and Constance Markievicz.

Skinnider was severely wounded when she was shot three times attempting to burn down houses on Harcourt Street to try to cut off the retreat of British soldiers who had planted a machine-gun post on the roof of the University Church; she lay wounded for three days while the fighting continued.

She was brought to St Vincent’s Hospital where she was arrested and held at the Bridewell Police Station. Skinnider was interrogated until a surgeon from the hospital contacted the British authorities in Dublin Castle and said she was unfit for imprisonment.

She spent many weeks in the hospital, and on her release, managed to obtain a permit to travel back to Scotland. Skinnider stayed in Glasgow until August 1916 when she returned briefly to Ireland, but quickly fled to America for fear of being caught and imprisoned.

While in America she collected funds and set out on a lecture tour to raise awareness of the fight for Irish Independence. During this time, she also published her autobiography Doing My Bit for Ireland.

On her return to Ireland in 1917, Skinnider took up a teaching position in Dublin, but she also taught the volunteers in preparation for another fight against British rule in Ireland. During the Tan war, she was arrested and imprisoned in Mountjoy Gaol.

Skinnider took the Republican side during the civil war and became the Paymaster General of the Irish Republican Army she was imprisoned again in 1923, this time in the North Dublin Union where she became Director of Training for the Republican prisoners.

After her release, she worked as a teacher at a Primary School in Dublin until she retired in 1961. Margaret is buried in the Republican Plot beside Countess Markievicz in Glasnevin Cemetery.

“It was an honour to speak at the first ever Cairde na hÉireann dinner dance in Coatbridge over the weekend,” she said. “I was especially honoured to be there as we gathered to remember a great Coatbridge woman and an iconic Irish Republican—Margaret Skinnider.

“When the Proclamation of the Irish Republic was read, Skinnider said: ‘For the first time in history indeed, a Constitution had been written that incorporated the principle of equal suffrage.’”

One traveller from the premier county was keen to pay respect to those who helped organise the event. Sinn Féin Councillor for Tipperary County Council, Tony Black, said: “What a weekend we had in Coatbridge for the Margaret Skinnider commemoration. From the second we arrived the welcome and hospitality was second to none.

“Thanks to Alan O’Donnell and Thomas McCarte for collecting us at the airport, to Robert Timpson for helping us arrange the trip, to Spike McKeown for the best sausage butties we’ve ever had and finally to Tomás Padraig Ó Laochdha for getting us to the Celtic game.

“We met some great people from Coatbridge, Dublin, Armagh, Derry, Down, Louth and many other places. It was great to hear Michelle Gildernew speak at the dinner on Saturday evening.

“It was special to see how much Margaret Skinnider is honoured in her own hometown, we would love to come back at some point and everyone is more than welcome to Tipperary anytime. We will try and match the hospitality we received over the weekend but I think that would be impossible to replicate.”