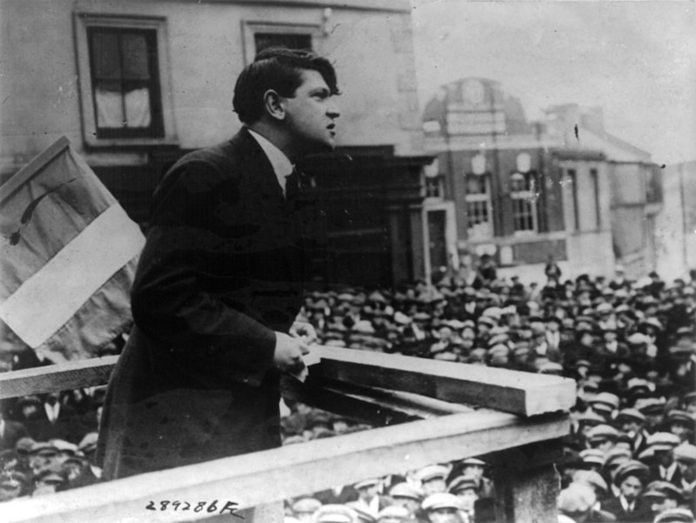 TAOISEACH Michael Martin and Tánaiste Leo Varadkar led the commemoration of Michael Collins at Béal na Bláth in West Cork as the centenary of his death was marked.

Thousands gathered at the site of his death 100 years on from the traumatic event which has cast a long shadow over Irish politics and society in the years since. Collins’ death, during the Irish Civil War, came in an ambush at the remote spot, and symbolises for many the brutal internecine nature of the conflict.

Generally more associated with Fine Gael, the address given at the site by Taoiseach and Fianna Fáil leader Michael Martin spoke of the unity felt by the two coalition partners of the Irish Government and shared traditions felt by Irish people today despite the divisions of the Civil War.

“This commemoration is an important statement of remembrance and gratitude. It is a mark of our respect for one of the great heroes of Irish history, a man who played an irreplaceable role in securing Irish freedom,” he said. “For the political tradition represented by Fine Gael this has long been a place to meet together and to remember a leader who has always provided a special inspiration for them. However, it is also an important site for all who honour and respect our independence struggle and our democracy.

“It is one of the greatest achievements of the last century that different democratic traditions have worked hard to show respect and develop a new understanding of each other. And we should acknowledge the special role which the Collins family and the Commemoration Committee have played in this over many decades.

“Fifty years ago their work led one of my predecessors, Jack Lynch, to designate the Collins homestead as a national monument and to take it into the care of the state. At the same time the Fianna Fáil Minister for Defence Jerry Cronin accepted an invitation to attend this commemoration and laid a wreath on behalf of the government. The invitation to my late colleague Brian Lenihan to speak here 12 years ago marked another important moment.

“These and many other generous and open gestures have helped ensure that democratic Irish nationalism has found so much common ground in looking back at our history and the role of our founders in winning independence. It is my honour and privilege to be here as Taoiseach and as leader of Fianna Fáil to join you in paying tribute to Michael Collins. I am proud that my Department has played a leading role in redeveloping this memorial and making it secure and accessible so that generations to come can continue to visit here to pay their respects.”

Mr Varadkar also spoke of the old divisions which he feels are healing, using his address to describe Collins as a ‘great prophet of freedom, killed before we reached the promised land.’

“The genius of Michael Collins was that he saw the promise and the potential of Ireland,” the Tánaiste said. “What made his vision so radical and original was that it was prepared to go beyond narrow definitions and rigid labels.”

“Today we make history of a different kind with two orations, one by the Taoiseach and Tánaiste of the day, the leaders of the two political parties which emerged out of the civil war, and which for too long were divided by mutual antagonism.”