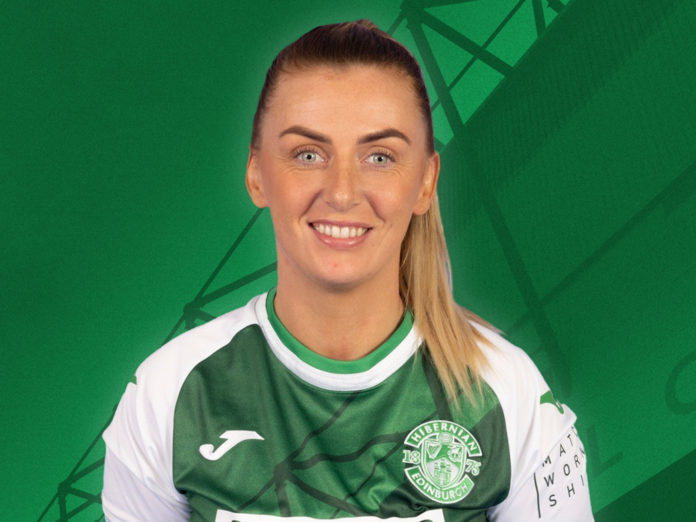 October also saw a club milestone reached by star and veteran of Hibernian Women’s side, Siobhan Hunter (above). The 28-year-old defender has now made 250 appearances for Hibernian, in a superb career which has seen her pick up seven cup-winners’ medals and receive international caps.

A stalwart of the very successful Hibs ladies sides of recent years, Siobhan is best known by the fans for her solid defending, pinpoint passing and her rocket shots. Moreover, while Joelle Murray may be the team’s captain and head, Siobhan is undoubtedly its beating heart.

The player first joined Hibs as a ten-year old way back in 2004 and is as big a part of the Hibernian FC story of the last 20 years as any other player. If there’s any justice, Siobhan will soon be inducted into Hibernian’s Hall of Fame.
Her length of service and her medal haul surely make her a candidate to join that illustrious list, which already includes greats like Stanton, Turnbull, Cormack and Wright. Siobhan Hunter belongs in that august fraternity.

Back on October 8, the men’s team beat 10-man Motherwell 1-0 at Easter Road, thanks to a goal by the wonderful Ryan Porteous. That victory was Hibernian’s fourth in a row.

Alas, there was no ‘five-in-a row as the Hibees slumped to a 0-1 defeat up at Tannadice, just three days after the win over ‘Well. Mykola Kukharevych had a goal for Hibs chopped off but the match was decided by an early goal from United’s Behich. Both sides missed a barrowload of chances, that night.

Next up, the Hibees travelled to Celtic Park, hoping to end a near 13-year winless run there. Elie Youan scored with a
wonderful strike for the visitors. Unfortunately, his first goal for the club was sandwiched amid a six-goal blitz from the champions, who ran out easy 6-1 winners. That was Hibernian’s worst drubbing since 2019, when the hopeless Paul Heckingbottom’s Hibs side was crushed by the same scoreline at Ibrox.

Hibs fans shouldn’t pay too much heed to this thrashing—it’s never a level playing field for non-Glasgow sides when they play one of the big two, especially in Scotland’s second-city. The financial gulf between the big two and the rest means it’s invariably a case of David vs Goliath—and Goliath usually wins in Scotland.

Friday October 10, saw a full house—or at least, all tickets sold —encounter under the lights, as the Hibees hosted St Johnstone. VAR made its first appearance in Scottish football for this match. Hibs played well for spells and even took the lead through Kukharevych, but newly-returned from injury, Kyle Magennis, was sent-off with 20 minutes remaining, and the Saintees rallied and overcame the ten-man Cabbage 2-1, in the end.

Back in August, Hibs were humbled by St Mirren in Paisley 1-0, amid what was a stuttering start to the season. On Saturday, a far more confident and impressive Hibernian side crushed the Buddies 3-0 at Easter Road. Goals came courtesy of Kukharevych, a Martin Boyle penalty and a screamer from Ewan Henderson. Hibs have come a long way since that loss in Paisley.

The three matches before the season is prorogued for the World Cup see the green jerseys face Aberdeen, Ross County and Kilmarnock—all winnable matches. Good results in these encounters will stand Johnson and his players in good stead for the four tougher tests towards year’s end; Rangers away, Livingston and Celtic at home, then Hearts at Tynecastle. Whichever way you look at it, the next seven matches will define the Hibs career of Lee Johnson.