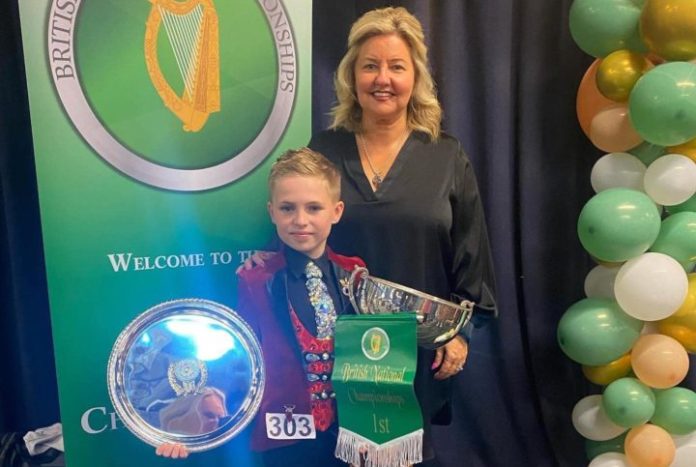 THERE were a number of successes to report for Scotland’s Irish dancing schools at this year’s British National Championships, held in the Whites Hotel and Conference Centre in Bolton.

Leading the way for Sharon Taylor Academy were Declan McLaughlin and Oscar Donnelly (above) who won their respective Senior Men and Under-11 Boys competitions. There were also podium places for Laura Davidson and Matthew Hughes, both of whom finished second in their respective Senior Ladies and Under-16 Boys categories, as well as fourth place finishes for Cora Burns in the Under-12 Girls competition and Dylan Stevenson in the Under-19 Men’s event.

“It was a very successful championships after a long summer of dancing,” teacher Sharon Taylor said. “The season has begun again for the dancers who are working now towards the next major championships in October—the All Scotland Championships.”

“We are absolutely delighted with our recent success at the British National Championships,” teacher Sinead McLaughlin said. “Of the 16 dancers we had competing we achieved five podium places, but all of our girls who competed worked very hard long into the summer and it paid off!

“We are particularly proud of our older girls juggling school and university exams whilst maintaining their fitness levels and competing to such a high standard. They are an inspiration to the younger girls in every way!”

Ethan Farrell continued his fantastic Irish dancing form by taking first place in the Under-13 Boys competition, something that delighted his teacher Susan Harrison, who said: “It was Ethan’s first major title. He has been second in every other major since we came back since after the Covid-19 pandemic, so it really was an exciting win for Ethan and beating the Irish National Champion gave him great confidence moving into this year’s feis season. We also had Rachel Gault who was 12th in the Under-14 Girls. She was the top Scottish dancer and second British dancer. This was an amazing result for Rachel in an extremely tough age group.”

Of Kyle’s success, teacher Eulalia Stewart Ayton said: “We are absolutely delighted at the results from the British National Championships. Kyle has been working extremely hard at class, and at home and is going from strength to strength.”