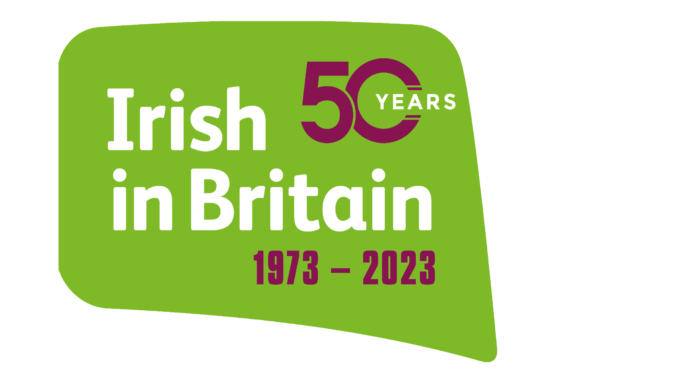 IRISH In Britain welcomed the award of funds through the National Lottery heritage Fund, which will allow the organisation to lead an ambitious 50th anniversary project.

The project will tell the story of how the Irish community here organised itself to put forward a strong vision of Irish identity in a time ‘shaped by economic, social, and political changes in the decades since the peak of Irish emigration to Britain.’

Formerly the Federation of Irish Societies, Irish In Britain will share the history of the Irish community as it sought to take its place in modern Britain in a unique historical project which will draw on the stories of the member organisations and the contributions they have made to Irish life in Britain over the last five decades.

“There has never been a more important time to champion migrant contributions to Britain, and we are proud to showcase the Irish community’s story in this national project,” Irish In Britain’s CEO, Brian Dalton, said. “We look forward to working with members to honour this story faithfully. “The responsibility it places on us to capture its breadth, diversity and potential is one we welcome because the legacy of those who helped build modern Britain is often misrepresented or misunderstood. For the Irish in Britain, it is a story that is still being written.”

A key part of the celebration will be to train ‘volunteer historians,’ who can gather and record the oral histories of a wide range of people across Britain, while ‘at-risk’ materials and records will be safeguarded and catalogue for future generations of the Irish community to cherish.

Forward-thinking elements of the project will also see the organisation reach out to marginalised groups, such as Irish Travellers, and seek to share their history with the Irish community and wider British society.

Yvonne MacNamara, CEO of The Traveller Movement, welcomed this approach as she said: “We are delighted to hear Heritage Lottery are supporting this work. Irish in Britain’s ambitious and important plans to document diverse experiences of Irish people in Britain through the organisation’s 50-year history will help capture and preserve the unique history of the Traveller community.

“It is an important history that has too often been marginalised. We look forward to working with the project.”

Ant Hanlon, speaking on behalf of Fréa, a member organisation of Irish In Britain, said: “We’re delighted to hear this wonderful news. Fréa, as a partnership of three long-established charities servicing Irish communities across the North of England understand the importance of sharing our stories, experiences and challenges in order to document the work that has been carried out through organisations like Irish in Britain.

“This project will document community action to improve the health and wellbeing of our communities, ensure greater representation and facilitate positive community relations. Something we are all very proud to be continuing for the next 50 years.”

The present work of Irish In Britain, of course, continues, and given the political crises engulfing Britain and the rapidly spiralling cost of living emergency, the organisation spoke out in an open letter signed by group across the country, calling on the government to urgently find solutions.

“We are calling on government to provide targeted financial support for those charities and voluntary organisations that are on the frontline of supporting people through this crisis,” the letter said. “And to ensure that charities, voluntary and community organisations are included in any plans to provide support to businesses.

“This is going to be a tough winter for everyone, but for those in greatest need it will be catastrophic. It is essential that urgent action is taken to support those individuals, and to ensure that they are able to access the help that they will need to get them through.”